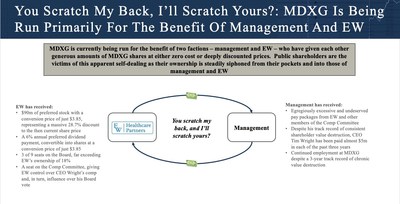 "We find it extremely suspect that, while MiMedx stated during the annual meeting proceedings that director nominees Phyllis Gardner and James Bierman were re-elected, the Company has not taken the usual step of promptly releasing the preliminary voting results to all shareholders."

"In the interest of full transparency, we call upon MiMedx to immediately release the preliminary voting results of the annual meeting, so that the public can see whether the Board and management have lost the confidence of the Company's shareholder base."

"We believe MiMedx is delaying the release of the preliminary vote tally because these results will reveal widespread shareholder discontent.  Based on our discussions with shareholders after the annual meeting, we believe the vote tally will show that a majority of the shares held by non-affiliated, non-institutional holders were voted AGAINST the Company's incumbent director nominees, and AGAINST the Company's executive compensation-based "say-on-pay" proposal."

"If, as we believe, the unaffiliated portion of MiMedx's shareholder base is truly unified in its discontent with the status quo, we are hopeful that this will be the catalyst for the Board and management to begin to operate MiMedx in the best interests of ALL shareholders, and put the Company on a more positive and constructive path."

This material does not constitute an offer to sell or a solicitation of an offer to buy any of the securities described herein in any state to any person.  In addition, the discussions and opinions in this press release are for general information only and are not intended to provide investment advice.  All statements contained in this press release that are not clearly historical in nature or that necessarily depend on future events are "forward-looking statements," which are not guarantees of future performance or results, and the words "anticipate," "believe," "expect," "potential," "could," "opportunity," "estimate," and similar expressions are generally intended to identify forward-looking statements.  The projected results and statements contained in this press release that are not historical facts are based on current expectations, speak only as of the date of this press release and involve risks that may cause the actual results to be materially different.  Certain information included in this material is based on data obtained from sources considered to be reliable.  No representation is made with respect to the accuracy or completeness of such data, and any analyses provided to assist the recipient of this presentation in evaluating the matters described herein may be based on subjective assessments and assumptions and may use one among alternative methodologies that produce different results.  Accordingly, any analyses should also not be viewed as factual and also should not be relied upon as an accurate prediction of future results. All figures are unaudited estimates and subject to revision without notice. Prescience Point disclaims any obligation to update the information herein and reserves the right to change any of its opinions expressed herein at any time as it deems appropriate. Past performance is not indicative of future results.

Prescience Point Capital Management is a private investment manager that employs forensic investigative techniques to unearth significant mispricing in global markets. It specializes in extensive investigations of difficult-to-analyze public companies in order to uncover significant elements of the business that have been overlooked or ignored by others.

Prescience Point manages private funds on behalf of its clients and principals and takes positions both long and short in support of its research. Prescience Point invests across a broad set of equities that it believes have abnormally large disparities between what their underlying businesses are intrinsically worth and what their securities sell for. The firm was founded by investor Eiad Asbahi in 2009 and is headquartered in Baton Rouge, LA. Prescience Point Capital Management is a registered investment advisor with the State of Louisiana. Follow @PresciencePoint.