LAFAYETTE, La., July 19, 2021 /PRNewswire/ -- The award-winning children's book series, The Alycat Series, by Alysson Foti Bourque is making its way worldwide, thanks to the Duchess of York, Sarah Ferguson, who featured Bourque and her lifesize mascot, Alycat, on her popular YouTube channel, Little Red News.

"Alycat Storybook Row was created for the purpose of allowing young readers to get outside and take part in an interactive story while enjoying the great outdoors with their families and friends. Sometimes the simple adventures are the most memorable," said Bourque.

In addition to the feature on Little Red News, The Alycat Series was selected for a read-aloud by the Duchess among thousands of books submitted by authors around the globe on her Storytime with Fergie and Friends YouTube show. The read-aloud will feature the award-winning Alycat and the Friendship Friday, and will be released July 23, 2021.

The Alycat Series features four titles: Alycat and the Thursday Dessert Day (2016), Alycat and the Monday Blues (2017), Alycat and the Friendship Friday (2018), and Alycat and the Tournament Tuesday (2020). Through relatable storylines and colorful illustrations, the books teach kids about perseverence, friendship, and problem-solving skills. The books have received glowing reviews from major publications such as Kirkus Reviews, Midwest Book Review, and Booklife Reviews. The bestselling series has garnered more than 17 awards.

Now traditionally published with Pelican Publishing, an imprint of Arcadia Publishing, Alycat and the Cattywampus Wednesdaythe fifth book in the Alycat Series is expected to hit shelves nationwide in Fall, 2022.

Bourque began her career as a teacher after graduating from University of Louisiana at Lafayette with a degree in Elementary Education. She earned a law degree from Southern University Law Center in 2007. After practicing law for six years, she traded in writing trial briefs for writing children's books. Alysson enjoys speaking with children and teachers at school and library visits with the life-size Alycat mascot and hopes to inspire people to believe in themselves, their work, and to keep writing stories. 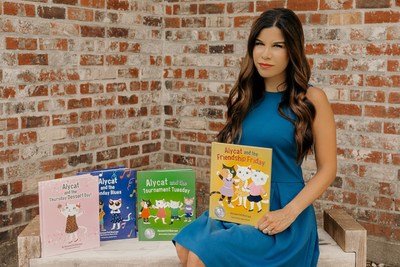