Ammo.com Donates Over $200,000 to Pro-Freedom Organizations

HARVEY, La., July 20, 2021 /PRNewswire/ -- Ammo.com's efforts to provide American firearm enthusiasts with the ammunition they need to train, hunt, and preserve their right to keep and bear arms are going stronger than ever. No figure better reflects this than the amount of money the American online ammunition retailer donated to pro-freedom organizations during the second quarter of 2021. 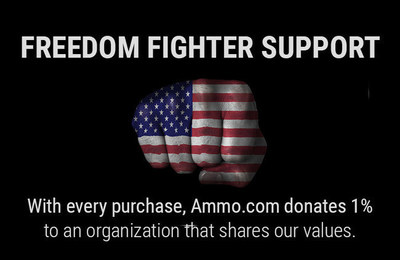 Ammo.com's Freedom Fighter Support program offers their customers the option of donating 1% of their total order price to one of 16 different pro-freedom organizations of their choosing. Should Ammo.com customers choose to make a donation, they do so at zero additional cost to themselves.

During the second quarter of 2021, Ammo.com donated a total of $27,093.67 to their several partnered pro-freedom organizations. These included the Mises Institute, the National African-American Gun Association Scholarship Fund, the Institute for Justice, the Future of Freedom Foundation, United Service Organizations, the Armed Citizens' Educational Foundation, the Illinois State Rifle Association, and the Texas State Rifle Association Foundation. Five of the top donation amounts are as follows:

"We are first and foremost committed to serving our customers for all their ammunition needs," said Alex Horsman, Chief Marketing Officer for Ammo.com. "But we are also grateful to engage their support for so many deserving patriotic organizations.

"When the dominant political party in the United States has repeatedly cast itself as antithetical to so many of our Constitutionally protected freedoms, it is now more important than ever to lend our support to organizations which fight for our rights. Whether our Freedom Fighter Support program aids that fight during battles in the courtroom, in the ballot box, in the halls of legislature, or behind the borders of war-torn foreign nations, we're proud to do much more to defend freedom and liberty than we could by only selling ammunition."

To date, Ammo.com's Freedom Fighter Support program has contributed over $200,000 to its recipients. You can learn more about the program on the business's website.

But Ammo.com does more than sell ammo. Their mission is to arm Americans both physically and philosophically, to fulfill the actual intent of the Second Amendment, and to protect the United States from its government by keeping the state in check.

In addition to the collection of information and resources they offer in their Resistance Library, Ammo.com supports the efforts of pro-freedom organizations through their Freedom Fighter donation program. This program gives Ammo.com's customers the option of donating 1% of their order price to a group that actively preserves our country's liberties  at no additional cost.